In many ways, this movement is a reaction to the world at the time of World War I and all the changes that were occurring in almost all spheres of life. The keywords that define the Dadaist movement are nonsense, luck, anti-art, experimental, anarchic and dissident. It was about reacting to the world and realizing that it made no sense.

The Dadaist period is roughly recognized to have taken place between 1916 and 1924, fully encompassing the war to end all wars. It took root in Zurich, Switzerland to begin with, and spread to New York and Paris as the war ended. The major names that are placed at the epicenter of the movement are Marcel Duchamp, Hugo Ball, Hannah Hoch, Francois Picabia, Hans Arp and Man Ray.

The word Dada is the French word for hobby horse and the Romanian word for yes. It quite literally makes no sense as the name of a massive artistic movement. The entire premise for the movement is that it is nonsense. In more critical terms, it is an avant-garde modernist movement. The idea was to do away with logic and rational thought, and rather embrace luck and irrationality.

There was so much changing in the world at the beginning of the 21st century, that this reaction was almost inevitable. It seemed natural to question everything that had come before, especially the notion of what made art good or bad or worth displaying in a gallery or museum. As feudal systems collapsed and capitalism allowed anyone to become wealthy, the people who were creating definitions about art were no longer people who needed to be listened to.

Taking Refuge From The War

Many of the artists that were part of the first wave of Dadaism fled to Switzerland at the outbreak of the First World War. The country was neutral, meaning these artists would not have to fight in a war that they did not believe in. This is how and why the movement began in Zurich. The artists came together with a shared belief and a shared feeling of not understanding what was happening in the world. The gruesome war became their inspiration to create something that was artistic but different to anything else already done.

The Cabaret Voltaire, a night club in Zurich created by Hugo Ball, was the spot where these disenchanted artists would gather. Painters, sculptors, poets, writers, musicians and dancers all came here to perform and to inspire each other. Their cry became “Dada!” The world was a confused place at the time, and the Dadaist movement embraced this feeling and sentiment wholeheartedly. The idea of putting on a performance of pretending to play a violin for a paying crowd was no more absurd or illogical than the war that was raging across Europe, killing hundreds of thousands of people. In some ways, Dadaism made more sense in this world than the reality of it. The two events are intrinsically linked and the artistic movement likely would not have happened without the war. 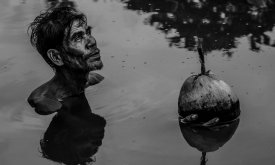