Humans have been creating art for countless millennia, and we’ve produced some truly breathtaking artworks in that time, with most of it either hanging in a museum or painted across a cave wall. And while most pieces of art have a description behind them, there are some pieces that have been a mystery since they were first unveiled to the public. These are artworks shrouded in mystery, and often lead to more questions than answers.

The Mona Lisa is arguably the most well-known painting in the world, done by history’s most popular artist, Leonard Da Vinci. But what many might not know is that there is a second Mona Lisa portrait, known as the Iselworth Mona Lisa. Many believe that the painting was done by the famed artist and inventor, as it contains many of his same techniques, although experts believe that the Isleworth Mona Lisa was created many years before the more popular version. The Isleworth Mona Lisa was discovered in a private collection well over a hundred years ago, and experts are still trying to figure out the details behind it.

The Crying Boy is an infamous painting that has become known for having an alleged curse attached to it. Accredited to Bruno Amadio, an artist of Italy; he painted a total of 65 different portraits of orphans, which he then sold to tourists that were visiting following the end of the Second World War. The most well known of these is The Crying Boy, which many believed is cursed due to its connection to a number of fires that have taken place across England. Whether there is a curse or rather a series of strange coincidences, it’s impossible to tell.

Bill Stoneham is the artist behind The Hands Resist Him, and it’s believed to be based on a photograph from the artist’s childhood. It’s a disturbing scene, with two children standing in front of a glass door, where hands are pressing up against the glass. Many have claimed that the paintings move at night, and that the figures fight with one another. Sometimes it’s better to save money and spend it on Malaysian slots online rather than potentially haunted paintings.

Created by Svetlana Telets, an artist from the Ukrainie, The Rain Woman is another infamous artwork that many believe is haunted or cursed. The painting was allegedly created in just five hours, and that all of the subsequent buyers of the piece have returned it to Telets, and have complained of feelings of being watched and of insomnia after acquiring the chilling art.

This particular painting was put to canvas by Laura P, and was inspired by a photograph originally taken by James Kidd. According to Kidd, however, there had been no man standing to the left of the stagecraft, which was the centrepiece of the painting. It’s believed that the man suddenly appeared in the photo only after it had been developed, and that the painting had been haunted, causing disturbances. Eventually, the painting was destroyed.

Masterpieces of the World’s Most Famous Modern Artists 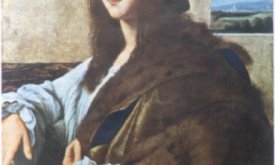 5 Art Pieces That Were Lost During World War 2