You’ve likely heard the phrase “but is it art?” and this perfectly describes the modern art movement. Used to describe artworks created in the period from the 1860s to the 1970s, modern art sought to break away from the traditions of the preceding periods while consistently challenging the prevailing concept of art itself.

Here we explore 5 of the world’s most famous modern artists and the masterpieces which confirmed them as iconoclasts.

Born in 1866, Wassily Kandinsky gave up a promising career as a law and economics teacher to explore his interest in art and became one of the world’s most famous modern artists. Described as a pioneer of abstract art, Kandinsky created some of the genre’s earliest works and even created what is considered to be the world’s first abstract watercolour.

A creative through and through, music played a major part in Kandinsky’s works, which is evident when considering the name of his most famous piece, Composition VII (1913).

Considered to be the most influential artist of the 20th century, Pablo Picasso co-pioneered Cubism and in doing so, broke through the artistic confines of the past. Picasso’s works were made especially abstract through the practise of depicting the subject from a multitude of viewpoints, however his style changed considerably throughout the course of his career.

Picasso’s most famous work is Guernica (1937) which is almost as incredible as Crazy Luck casino.

Frida Kahlo was studying medicine when she was involved in a bus accident in 1925 which left her barren and with severe injuries which required her to have 35 surgeries during the course of her life.

Kahlo began painting while in hospital and focused heavily on self-portraits which incorporated symbolic imagery of her physical and psychological injuries. Considered a feminist icon for the way in which she chose to live her life, Kahlo is arguably the world’s most famous female modern artist and is most well-known for The Two Fridas (1939).

Of all the practitioners of this technique, Jackson Pollock was by far the most famous and he popularised the term ‘action painting’. No. 5, 1948 is considered Pollock’s ultimate masterpiece.

Considered to be the last prominent movement within modern art, Pop Art made use of recognisable imagery from popular culture. Andy Warhol is certainly the most famous practitioner of the genre and is still known as the “Pope of Pop” today.

The commercial aspects of his works initially caused controversy especially when considering how it eschewed the philosophy of Abstract Expressionism and soon Warhol became a household name. Exploring a variety of media, Warhol is most famous for his work entitled Marilyn Diptych (1962). 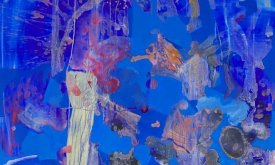