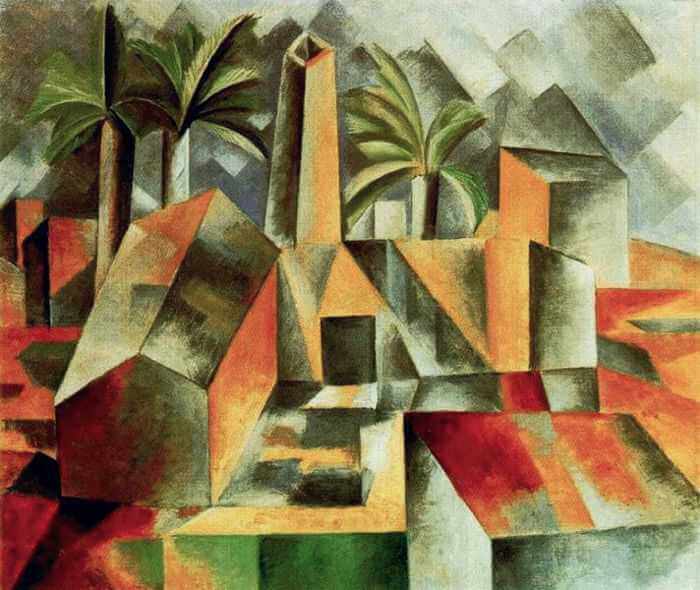 Pioneered by Pablo Picasso and Georges Braque in the early 20th century, artists of the Cubism movement eschewed the realistic perspectives of space and form which had been used since the Renaissance and focused rather on the open form of figures and objects by allowing space to flow through them from varying angles.

Many art historians have described the movement as a response to the changing experience of life in the modern world.

Shocking even to his closest contemporaries owing to its subject matter and formal experimentation, Picasso’s Les Desmoiselles d’Avignon depicted nude figures in sexually aggressive poses with almost mask-like faces, suggesting not only an aggressive sexuality, but a primitive one at that.

Abandoning all illusion of three-dimensionality, Picasso rendered a drastically flattened image broken into geometric shards, allowing equal attention to both foreground and background.

Influenced by Picasso and Paul Cézanne, Georges Braque’s Houses at L’Estaque took from Cézanne the singular directionality brushstrokes and flat spacing and from Picasso the extreme simplification of form and use of geometric contours to define objects.

With no clear horizon and no depth through the use of shading, the landscape and houses both occupy the foreground and seem to overlap.

Even though Picasso and Braque were stripping figures and objects of substance, Jean Metzinger remained devoted to legibility, thus reconciling modernity with classicism – much like online betting NZ combines new technology with an age-old pastime.

Tea Time was displayed at the Salon d’Automne in 1911 and was dubbed by art critic Andre Salmon as “The Mona Lisa of Cubism” as despite the realism of the painting, Metzinger abandoned the lone point of view which had been in use since the Renaissance.

Robert de la Fresnaye’s use of joyful colour and optimistic subject matter did much to incite popularity for the Cubism movement ahead of WWI and depicted himself and his brother Henri sitting at an outdoor table in his most famous work The Conquest of the Air.

The yellow hot-air balloon in the background likely refers to the Gordon Bennet Cup which took place annually from 1906-1938.

Robert and Sonia Delaunay exhibited alongside the Salon Cubists and later founded a movement heavily influenced by Cubism known as Orphism.

Through the use of geometric forms and flattened perspective, the Delaunays also a displayed an interest in colour and concept, using overlapping images to imply a 4th dimension, suggesting that events and objects are “inextricably connected in time and space”.

The work of Juan Gris is often considered to be the most similar to that of Picasso and Braque and by 1914 he had developed a penchant for collage through his inclusion of newspaper and magazine cuttings into abstract scenes.

While some of his works are bona fide collages, others such as Still Life with Open Window, Rue Ravignan are paintings meant to resemble collages.