Modern contemporary art is alive and thriving on the African continent. There are so many talented painters, sculptors and more who are creating work that is turning heads and commenting on the world. Globally, there has been a simplistic notion of the art that comes out of Africa that has been formed by Eurocentric ideas. For too long, the world has seen Africa as being only traditional and pushed into a generic mold.

It’s time for African contemporary artists to step into the world’s limelight and be seen for the creators that they truly are. It’s a vast continent brimming with talent, making it difficult to pick only a few names, but here are some of the top artists coming from Africa:

After studying in California and then in London at the Royal College of Art, Camp has made a name for herself in the European market. Hailing from Nigeria, Camp has brought the traditional world of African masks into modern, contemporary art forms. She creates human-height steel sculptures that reflect a link between her heritage and her current surroundings. Her work is largely a comment on the ties and relationship between the West and the African continent. 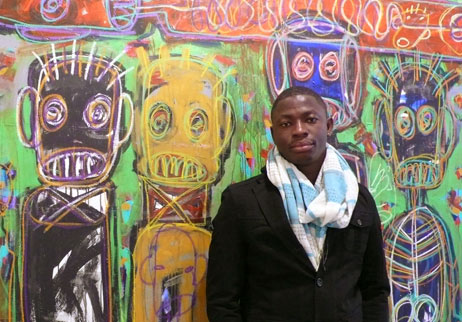 This Ivory Coast painter has been heavily influenced by his immediate surroundings, working through the civil war that rocked his home country between 2002 and 2007. He chose to stay and now uses the experiences of hearing the gun fire and the conflict outside his studio to influence his work. The themes through all of his paintings revolve around children, particularly children who have suffered through poverty, living on the streets, fighting in wars and other painful situations that they should not be living in.

Africa is no stranger to war and the weapons that the West have brought over to the continent. Mabunda, from Mozambique, uses these weapons to create works of art that transcend their original purpose. He comments on the war mongering of humans and does the world a favor by removing weapons from the world so that they can no longer be used to cause harm. It is his hope to represent those who have been killed by creating his sculptures out of the very thing that has been used to do the killing.

In 2015, Mabunda came fully into the global public eye after one of his works was confiscated while in transit to the USA. A collector from Philadelphia, Adam Solow, was attempting to import the work but custom officials decided they didn’t like the look of the weapons it was made out of.

This South African artist has been heavily influenced by the likes of Andy Warhol, Lucian Freud and Francis Bacon. He paints, sculpts and prints his artworks, which have been met with critical acclaim around the world. Smit grew up in an artistic home; his father was a sculptor. His goal in life is to continue to shine a light on the faces of South Africa through his work.

Erté – The Father Of Art Deco