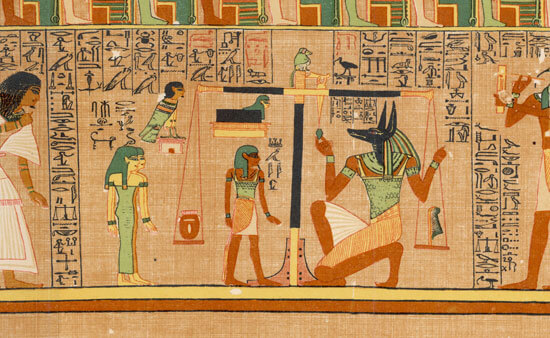 Even though the ancient Egyptians had no word for art, the pieces of exceptional beauty created were inspired by their deep reverence for the gods. While this reverence was clear in the pieces created, ancient Egyptian art also reflected a greater sense of order which gave rise to a distinct style of art which remained mostly unchanged for more than 3000 years.

Created in 31st century BC, Narmer’s Palette is a green schist stone carved into shield-shaped ceremonial palette which depicts the rise to power of pharaoh Narmer. Decorated on both sides, the 58cm high palette is one of the oldest known ‘canvases’ of ancient Egyptian hieroglyphic writing.

2. Egyptian Book of the Dead

Known as the ‘Book of Coming Forth by Day’ to ancient Egyptians, the Egyptian Book of the Dead was a scroll entombed with various people wealthy enough to afford a vital guide through the Underworld upon their death. The writings – a collection of magic spells which assisted the dead upon their journey – were accompanied by beautiful imagery to ward off danger.

3. Astronomical Ceiling in the Tomb of Senenmut

The tomb of Senenmut, the architect of the celebrated Pharaoh Hatshepsut’s tomb complex, features an astronomical map on the ceiling. Consisting of two sections – the northern and southern hemisphere – the map depicts the 12-month Egyptian calendar, the northern constellations, and stars and planets visible to the naked eye. Created long before online blackjack Canada in the 15th century, it is the oldest map of its kind.

Created in 15th century from basalt, the statue of Thutmose III immortalised the 6th Pharaoh of the 18th Dynasty and depicts a graceful, yet powerful King. The face of the statue also reflects a slight resemblance to Thutmose’s stepmother, aunt, and temporary co-regent Hatshepsut, all of whose statues he had destroyed upon becoming a sole ruler. 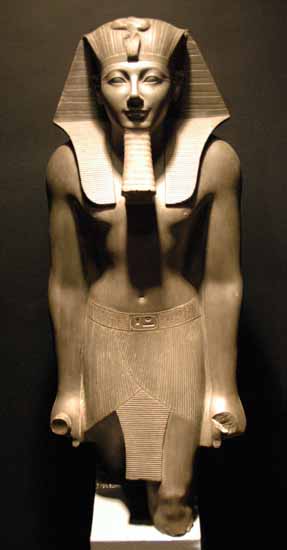 Created by sculptor Thutmose in 14th century BC, the limestone bust is layered with painted stucco and depicts Akhenaten’s wife Nefertiti. While little is known about Nefertiti, her name meant ‘the beautiful one has come’ and the clear reverence of her beauty has been bestowed upon the statue by the artist.

Tutankhamun, the son and successor of Akhenaten, died at 19 years old, most likely from an infection contracted while recovering from a broken leg. Tutankhamun was buried with a 10kg golden death mask made from solid gold and inlaid with blue glass, lapis lazuli, and semi-precious stones, which was placed over his head and shoulders. While thought to be somewhat idealised, there is a general agreement that the mask is essentially a realistic portrait of the ‘Boy King’.

Created from basalt in 1st century BC, the black statue is one of the most pristine depictions of the last Egyptian Pharaoh, Cleopatra VII. Presenting her in mid-stride, wearing a long form-fitting dress, the statue exposes the influence of ancient Greek art due to the styling of the beautiful Pharaoh.