The ancient world was as packed with as many wonders as we have today, from incredible pieces of art to breath-taking statues of all shapes and sizes. Some were so monumental that they were admired by the people of the time, becoming legendary among our ancestors.

Many of these statues have stood the test of time and can still be found today for anyone willing to go on an adventure to find them. Here we will explore some of the statues from the ancient world that are still around today.

Created by the Rapa Nui culture around 1500 CE, the monolithic human statues can be found dotted around Easter Island, and depict people with large heads that were once thought to be build without bodies. The heaviest one of them all comes in at an impressive 86 tons in total, making it a marvel that the people were able to transport the statues at the time. Historians have not been able to figure out how the Rapa Nui were capable of carving and transporting the monoliths, especially considering that well over 900 of them were made.

These sculptures can be found in the city of Gwalior, which is located in Madhya Pradesh in the country of India. All of them have been carved out of the rock cliffs, which lead to the Gwalior fort which was created sometime in the 8th century. For many centuries, the statues were worshipped by the followers of Jainism, who believed that they were Teaching Gods. 21 temples in total were cut into the surrounding cliffs, with the first of them being Thirthankara.

Cut into the cliff at the convergence of three different rivers in the Sichuan province, China, the Leshan Giant Buddha is one of the largest statues in the world, and the largest stone Buddha ever made. Starting in 713, and led by a monk named Hi Tong, the construction was not completed until along after his death. It is today a UNESCO heritage site, part of the Mount Emei Scenic Area, which also includes 30 different temples, as well as forests that are home to trees that are over 1000 years old, making it a truly special place worth seeing at least once.

These sculptures were built around what historians believe is some type of royal tomb during the first century BC near Mount Nemrut in Turkey. King Antiochus I Theos of Commagene created a tomb that was surrounded by statues in his likeness, as well as two lions, two eagles, and a number of gods that have been linked to Iranian and ancient Greek origins. Much of the original statues has gone missing over the years for religious regions, although time has not been too kind to them either. They have remained as they are since, however, and provide a fascinating look back 2000 years into the past. 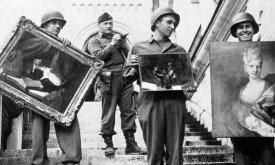